I received this book from Smith Publicity in exchange for an honest review. Thank you. 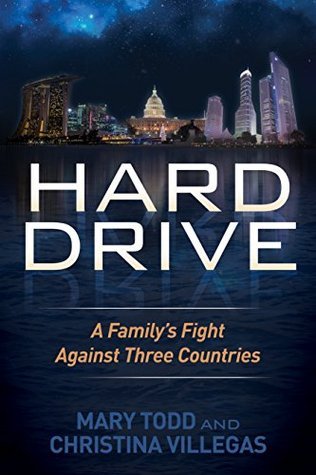 Hard Drive is a heart rending narration of a family’s fight to unveil the truth behind the death of a loved one. Shane Toddman, an American engineer was found dead in his Singapore apartment on June 24, 2012. The Singapore Police Force were quick to conclude that his death was undoubtedly a suicide resulting from days of depression and anxiety. When his family arrived in Singapore, they found it dubious that Shane, who until yesterday was more than a happy to be returning home and highly optimistic in nature would ever think of taking his own life. With that thought in mind, Mary and Rick Todd, his parents, begin the tiresome journey of seeking justice for their beloved son. But justice in a foreign country is as fragile as a frozen lake. Particularly with large influential forces teaming up to disguise the truth and their cruelty. When the police, judicial system and their own countrymen desert the fight, the entire family is distraught with the superficiality of mankind. In a battle that brings forth clear evidence suggesting another conclusion, the Todd family will strive their best to reveal to the world, the actual culprits.

I was so happy to receive this book. But at many points throughout, it was a rather tear inducing task to keep reading despite the anguish and pain clearly etched out in Mary Todd’s and Christina Villegas’ words. Unlike any murder mystery I’ve ever read, this book takes the trophy. Not only because it isn’t fictitious but the extreme efforts put in by friends and family of Shane Truman Todd is so evident in the notes, website links, newspaper article references that have been included. It is well written and gives us readers a thorough understanding of what the Todd family were made to feel in their quest for truth. It is impressing and inspiring to know that there are families who persist regardless of the power they are going against. Reading the authors’ description of Shane, it would have been rather astounding if the truth behind his death were not revealed to the world. Whether it has been legally concluded or not is a different story. To have millions of people know the truth and have them fight alongside the family, would have been an immense source of strength though the difficult feat. The novel covers in a matter of 17 chapters, all the evidence that was accumulated by the family (even though gathering evidence is the job of the police force). I am ashamed to think that there are still institutions and people being controlled by money and status; who willingly turn a blind eye to justice for their personal gain. The book cover is made of a soft velvety material. Also at the end of the book, the authors have put in few photos of Shane through his life, which was so saddening to see. To know of such a story in depth makes one realize  how petty mankind has become. I salute the family for being so strong and persevering when many would not have. We all can gain a lot out of reading this book and I recommend it to each and everyone out there. Grab it, devour it and spread word. Pray for those who aren’t able to speak out in such loud volumes.