Big thanks to the author, A C Harrah, for providing me an e-copy of her debut novel for review. 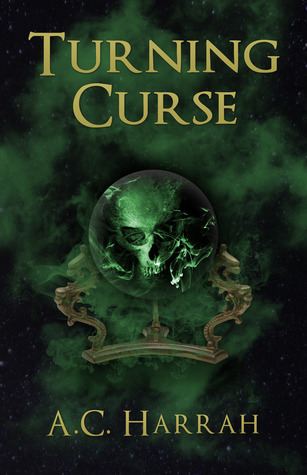 Turning Curse is a tale of magic and royalty; of friendships and betrayals; of love found in the most unexpected of circumstances. Liam, an extremely notorious prince lived in his own world of child’s play and wouldn’t heed to his father’s wishes. His days of pranking never ceased to shock and disgust the royals while delighting his good friend Cordelia. She is the only one who understood his aversion to all things planned by his father – from his being the next King to getting married to some high and mighty royal’s daughter.

But when King Gerard suggests that Cordelia and Liam wed, his instantaneous refusal doesn’t sit well with her, who in the heat of the moment curses Liam to take another form for having neglected her to such an extent as to not ponder over the possibility of a relationship. This is a fascinating retelling of the Princess and the Frog with a twist. Liam, helpless as he is, looks to Cordelia’s servant Gabrielle to find a way out of the mess. But what he must accept is that along with Gabrielle, many others around him, have dire secrets to hide which take priority over Liam’s plight. Who will be his saviour or will he forever be confined to the body of a frog?

I really adore fairy tale retellings and so I jumped at the opportunity to review this. But somewhere after the first few chapters, it became an effort to carry on reading. And believe me, I tried to find something that I liked. Liam is so immature and childish, it began to leave a rash on my mind to the point that I liked scenes without him. Which is a sad thing to think for the protagonist of the novel. There isn’t much I can say without making it a spoiler so this going to be vague but the novel had one of those “instant love” aspects going on which I found very difficult to absorb. Cordelia’s character is one of the things that I enjoyed. She is very feisty and courageous. But unlike Liam, who gets around to adjusting into the royal life, she takes a stand and outrightly refuses. It is Cordelia who plays an integral role in putting together all the pieces of puzzle towards the end. The author’s writing style was also something I liked, as she pays sufficient attention to detail. Using the right amount of imageries to let us picture the sights. The story wasn’t as predictable as you’d think, but I wish it had been more gripping. Some of the dialogues I found lacked conviction and made the entire scenario lose its focus. Cordelia’s parents, Evelyn and Cornelius were underplayed and could have contributed much more to the story. I wanted to like it more but that only happened in little bits of the novel.