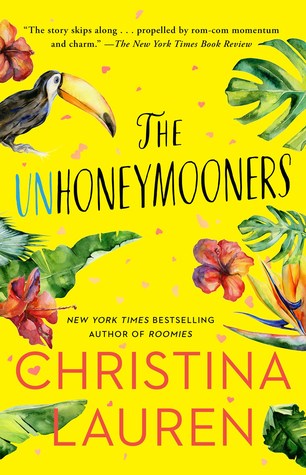 Christina Lauren’s The Unhoneymooners reads like a warm blanket on a rainy day. It is packed with laugh-out-loud humor, relatable characters and a ship you can’t help rooting for.

Olive and Ethan can barely stand to be in the same room as the other. But when their siblings’ wedding goes awry and the two are faced with the chance to go on an all-paid honeymoon, they decide to bear with each other’s presence for the sake of a much-needed vacation.

This novel filled me with such absolute joy! Right from the get-go I was laughing and grinning cause of the expertly imbued comedy. If this is any indication of Christina Lauren’s writing style, I am sold. What makes their writing more hilarious is the effortless and subtle nature of the humor quotient. It’s almost as if the authors don’t intend for something to be funny, but because of the straightforward depiction of people and situations, the scenes automatically elicit a smile from the reader. The narrative is colloquial and has some really engaging dialogues.

Truth be told, the plot isn’t out-of-this-world unique. But its execution is what takes the cake. There are quite a few popular tropes like enemies turning to lovers, siblings having opposite personalities, fake relationship, cheating male characters etc. And ideally, I wouldn’t pick up a book with such tropes, but I’m so glad that I didn’t pass up on reading this one. Olive’s habit of making lists to sort through her feelings is an interesting component and so this book is written in an epistolary format with lists and text messages interspersed in scenes.

While some of the characters possess almost stereotypical identities, there are others that are refreshingly realistic. Olive’s sister, Ami has a knack for winning contests and seldom has to spend her own money on anything. She prefers to save money where possible. I related so much to this! I was happy to read about Olive, as a protagonist, being portrayed as someone who doesn’t have a size zero figure. There are times when she “regrets eating all those donuts” but there are also moments when she is totally comfortable in her own skin. And this was really inspiring.

There’s a whole lot of sass, drama and misunderstandings. I just wanted to reach into the pages and set things right so that all of these characters wouldn’t be hurting. The resolution of the final conflict doesn’t occur in the way I’d wanted it to. I felt that those who were in the wrong didn’t really account for their actions. But on the whole, I’m fine with the way the novel ends because of all the warm, fuzzy feels that go with the writing.

I have a feeling (a strong one) that I’m going to re-read this real soon. And I’ve never re-read a rom-com, contemporary novel in my life! So that’s saying something.

2 thoughts on “The Unhoneymooners by Christina Lauren”