In the town of Near, there are no strangers. The resident families have been there through it all. So when the arrival of a mysterious boy precedes the gradual disappearances of the children in the town, the people of Near call for retribution. Although Lexi spied this stranger from her window, becoming one with the night and floating away with the wind, she is certain that he is not to be blamed. And so, despite her uncle’s warnings and at the risk of invoking the townsfolk’s wrath, she sets out to find him before the hunting party can get to him.

I honestly do not know how to do full justice to this book by merely pointing out everything that is good about it. So I’m going to preface my review by saying that YOU MUST MUST READ THE NEAR WITCH.

I’ve begun to pick up on the kind of vibes V.E Schwab creates in her books and I simply love it! 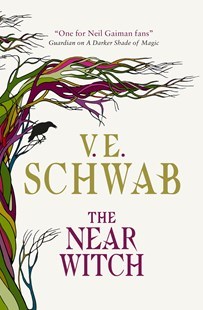 This one is haunting and action-packed. It had the sense of a folktale being narrated to a child and I found myself wanting to remain immersed in this world long after the story had ended. The author’s writing is mesmerizing, detailing only that which is essential for us to visualize the story. Her world building wins all the brownie points. The Near landscape, the lifestyle of the people, the elements of nature – adds a lot of dimension to the plot execution.

On the surface, this novel is pretty much like your quintessential story about good vs evil. But what I particularly appreciated about it is the way in which it highlights a lot of themes prevalent in our world today. In the ostracization of the Thorne sisters, I saw the bigots of our society. In the admonishing of Lexi, I saw people who were afraid to let women make their own decisions. In pining the disappearances of the children on Cole, you get a glimpse of power-mongers and the extent of their cowardice.

Reading a lot of thrillers and mysteries has made me readily suspicious about characters in every book. So I cooked up all kinds of theories about what was happening to the children, why Cole has come to this town all of a sudden etc. But I was happy to realize that for a good chunk of the novel, we were not going to be able to pin-point the ending. I liked that unpredictability. The following are some other aspects of the book that I appreciated:

The references that are made to Lexi’s father and how he has helped shape her personality adds a lot of value to her character and affirms the fact that Lexi is not a rebel just for the sake of being one. She was raised differently by her father. One thing I didn’t like about the book is how a love interest gets passed on to another character when he realizes that he has no chance with Lexi.

Overall, this was such a fantastic read! It has easily become one of my top reads of 2019. I would recommend it to everyone who enjoys the fantasy genre.

Thank you Bloomsbury India for sending me a copy of this book in exchange of an honest review.

One thought on “The Near Witch”