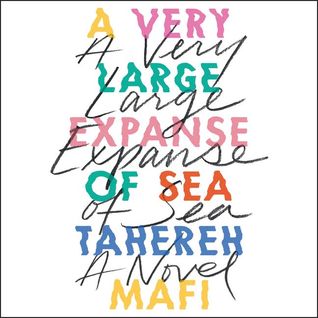 Narratives on religion and the implications of shifting blame have been written time and time again. But what is extraordinary about Tahereh Mafi’s brainchild is the brandishing of a character, a 16 year old American girl of Iranian descent, whose integrity is questioned simply because she happened to exist in a time rife with terrorism and extremism. Before 9/11, Shirin led a relatively more peaceful life. But ever since the heinous incident set the world against those of Islamic faith, she too has been marked as the harbinger of all evil. She can’t set foot in public without having to hear racist slurs thrown her way, and for what? Choosing to display her religious inclination without fear?

Told from the point of view of a person of color, A Very Large Expanse of Sea is more than a YA romance. In all its honesty, it brings to us the extremely fickle nature of high school hierarchies. Even the hypocrisies that underlie societal behavior towards men and women of similar backgrounds is seen in the novel. It is apparent in the way Shirin and her brother, Navid are treated. While she is constantly battling remarks like, “Why don’t you go back to where you came from?”, he receives no such flak for being a Muslim. That begets the question, are symbols of diversity what propel people into deepening cultural barriers. Simply because Shirin chooses to wear her hijab and be empowered by it, she seems to remind everyone of her “otherness”. Moreover, the interactions, that Tahereh Mafi puts to paper in this book, are appalling enough to make you wonder if people are so blinded by fear as to fuel a fascist society.

Some of the things I really appreciated about this book is the inclusion of Persian words and a passing mention to a learning disability. You don’t really find that a lot in books. I was really pleased to read about a family that hadn’t allowed modernization to scrape away at their roots and traditions. The author’s writing style is crisp and straight forward. Shirin’s voice appears to be blunt at first, but her increased attachment to Ocean thaws her resolve and by the end of the book, her personality changes a bit.

One of my biggest pet peeves with regards to stories is having a character make sacrifices on the behalf of another (for the betterment of another) and I was quite afraid that was going to happen in the book. While Ocean is an incredibly supportive and open-minded character, it was Shirin’s story that appealed to me more; her struggles and her opinions. All in all, I would definitely recommend reading this book for the sake of the themes it juggles with, not necessarily for the love story aspect of it.