The Scout is an informative factual compilation that sheds light on not only the terrorist attacks of 26/11 in Mumbai but also brings to the forefront the build up and aftermath of it. The authors Shirish Thorat & Sachin Waze have managed to capture, in this 200 paged volume, extensive details that allow for an indepth understanding of the mentality of the terrorists as well as the unity of civilians and police forces alike in Mumbai. Ranging from numerous weaponry to game plan tactics, this book informs us as to how such a large scale attack was carried out. By presenting the facts plainly, the book garners empathy because it speaks of an event that has affected thousands of people. Complete with a glossary and bibliography, the authors have ensured that the reader is equipped with the necessary information so as to fully be able to understand the extent of what transpired in Mumbai on 26th November, 2008.

A wonderful initiative by the two authors, this book surpasses any newspaper report that you could 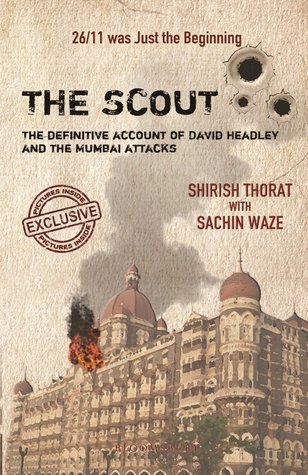 read about the terror attacks. It presents to us conversations carried out within the terror groups, the tactics employed by Indian police force to subdue the attacks and also the casual indifference with which the terrorists moved onto their next target. While I liked reading this book and gained more insight into an event that I only new of on the surface, I did not give it a 5 star rating because of a couple of reasons. Firstly, a major chunk of the book is interspersed with overwhelming details about different sorts of weapons; people and places that David Headley travels to. I understand it is extremely integral to the event, but I found it a little difficult to digest. Hence, completing the book took a lot longer than it should have. Secondly, at times, a couple of pages would comprise of a series of facts strung together almost appearing to be bullet points and so they didn’t blend with the narration of the events.

Because at no point in the book do the authors paint the attackers in a negative light through the use of their words or implications, it would be safe to say that The Scout is not a biased account. Largely so because we get both the sides of the story and can therefore make the conclusion ourselves. I would definitely recommend it to all because of how thorough this book is in addressing the issue that is the focal point. While it is inherently about the 26/11 tragedy, it does highlight the larger problem, that of the ruthless nature of terrorism which is often backed by fallacious beliefs. So be sure to grab a copy and give this one a go because it truly is an enlightening account of 26/11.