Disclaimer – All images in this post have been obtained from Google. I do not own any of the images.

Pinocchio, aired on SBS channel, is a drama about the underlying corruption and discrimination that rules the media firms in today’s time. Albeit being set in Korea, it wouldn’t be far fetched to say that it mirrors the problems faced by reporters and producers around the world. In this case, the protagonist Choi In Ha (played by Park Shin Hye) has the Pinocchio Syndrome wherein she hiccups uncontrollably if she lies. Since childhood, In Ha has been craving to meet her mother who left her and her father to pursue her career as a reporter. Naive and innocent, In Ha believes that her mother would accept her when they meet in the future and so for thirteen years In Ha sends her mother text messages about her daily life. However, her mother leaves behind her phone at the house of a large department store owner. Seo Bum Jo (played by Kim Young Kwang) who is the son of the owner, intercepts these messages and as the years pass, grows to love In Ha. He is determined to meet her and so auditions to become a reporter at YGN.

Ki Ha Myung (played by Lee Jong Suk) is the son of a fireman who was accused of causing the death of his fellow firemen. As the reporters propel the case out of proportion, his father flees and is never heard of again. Humiliated and isolated in society, Ha Myung and his mother commit suicide. The only living member, the elder broth Ki Jae Myung is devastated and vows to right the wrongs of the reporters who pushed the family to take such drastic measures.

This drama was a treat from the start. The pain felt by Ki Ha Myung’s family is vividly portrayed and 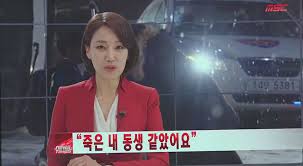 so exceptionally done that you feel for them. The plot isn’t as simple as it appears and there are so many layers to the story, each of which is peeled off one by one as the story progresses. The cutthroat environment that is created by rivaling broadcast companies is played out for the viewers to understand the functioning of news channels and the crooked tactics that they sometimes employ to obtain a story. While the character of Song Cha Ok is very detestable, Jin Kyung does a wonderful job of acting. She is so convincing in her role that even though I hated her for most of the drama, towards the end I was very glad for her. Her character development would be one of the best for the show. I also liked how In Ha and Ha Myung got to know each other and the entire process from them being friends to a couple was rather adorable.

Even though the Pinocchio Syndrome that was used in the drama is fictional, it proved to be integral to the storyline. Initially In Ha faces a lot of flak for not being able to lie, which is somehow “important” to become a reporter. As the drama draws to a close, we see how she becomes an  exemplary model of a reporter and teaches the others ideals and values to be upheld as a reporter. Being a media student myself, I loved this drama for its content and the morals that it showcased. While In Ha and Ha Myung were meant to be, I wished that Seo Bum Jo was given some importance. In fact he does serve a vital purpose in the drama and things do get resolved all due to him. But he is left behind with this unrequited love and for some reason I always wish that the main leads would pick the secondary characters. Moreover, I felt that In Ha’s behavior towards him was a little cold and she wasn’t as considerate of his as he was of her. Anyhow, the drama has been put together very well and some of the characters like Hwang Gyo Dong, Ahn Chan So were very endearing. All in all, I thoroughly enjoyed the drama and would recommend it to all.