Cometh the Hour, being the sixth book in the Clifton Chronicles, juggles the life and times of the 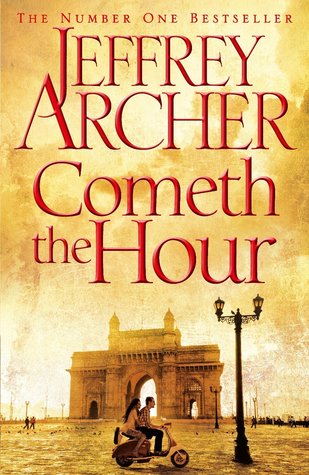 Barrington and Clifton families as they undergo the hardships that come with great responsibility. Interspersed with accounts of betrayal, corruption and the fight for justice, we see how the bonds between the two families paves the way for their success regardless of the magnitude of trouble they are facing. Be it Emma Clifton, who finds herself balancing few too many tasks and must decide between jeopardizing her brother’s career or winning a case against her. On the other hand, Sebastion Clifton fights a different battle – one of love – wherein he must draft a plan to rescue his beloved Priya before she is forcefully married off by her parents to another.

While the Cliftons and Barringtons are held up with their own obstacles, Desmond Mellor, Jim Knowles and Adrian Sloane form the villainous trio who repeatedly, undaunted by the power and reach of the two families, take it upon themselves to bring them to ruins. Sir Giles Barrington faces the brunt of a truth revealed in the course of Emma’s case and participates in a rescue mission between countries. Little does he know that this mission threatens his well being more than not. Lastly, Harry Clifton having encountered the great Russion writer and poet Anatoly Babakov in prison perseveres for over a decade to free the writer and spread his work beyond the borders of Russia. Each of the battles fought by the families results in some victories and some losses.

As this was my first Jeffrey Archer book, I knew not what to expect from it. I was extremely relieved when the book started off on a good pace with the case by Lady Virginia against Emma Clifton. The conniving nature of Lady Virginia was evident from the start. But soon after the politics took over and I grew to like the book a little less. It was all too overwhelming and I didn’t quite like the chapters with Emma Clifton in them. However, at any given point in the book, there’s so much going on that you get a wholesome feel. Its not just one story or one trial, but multiple ones that are woven together to create a voluminous chunk of a book.  My favorite sections were the ones with Lady Virginia, Desmond Mellor, Adrian Sloane and Karin Brandt. They were definitely far more gripping than the other chapters and I looked forward to the stories about these. In terms of character development, there were discernible changes in Sebastion and Emma Clifton. I felt that the other characters pretty much remained the same.

The plot was great too but some parts of it were a little dull and not interesting. I took way too much time to read it because at times I felt like I couldn’t go on reading it anymore. I felt that Sebastion and Priya’s relationship was a tad bit too abrupt and forced. It didn’t feel natural. And then introducing Samantha and Jessica felt out of the blue. Many books try to correct the wrongdoings by the villain by also enhancing their personalities. But I quite liked the fact that till the very end Lady Virginia, Adrian Sloane and Desmond Mellor remained the same. Their tactics and manipulation kept the book alive. Jeffrey Archer’s writing is easy to get into and while being informative, it grasps us with the twists and turns. The ending was good, different. I expected the truth about Karin to be revealed openly. This book was enjoyable over all, but I didn’t love it as there was way too much of politics and some parts were too slow.