In The Following Girls, Louise Levene depicts the toils and troubles of being a high school teenager who is expected to conform to conventional standards. She explores the idea of deviance and the consequent disciplining through her protagonist Amanda Baker who doesn’t show great interest in the vision or expectations of her school, Mildred Fawcett. With the other three Mandies, Baker lives on the sidelines, constantly getting reprimanded by not only the faculty but also her father. But when the once hostile Julia Smith lends a hand of friendship, will Baker’s life too take an unexpected turn?

Both the cover page and synopsis are so intriguing, but somehow, for me, the book fell flat from the 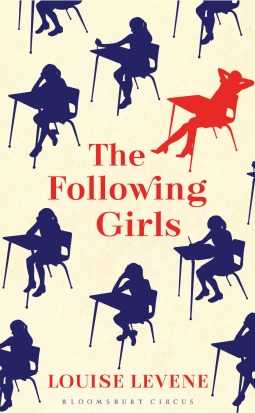 very beginning. I had to struggle to read it and for atleast the first 90 pages there was no clarity or apparent direction to the story. I felt that there was too much information randomly patched together and often I had to go back and read the previous paragraph to look for a connection. In between some good, entertaining portions would surface and keep me going. I did not want to drop the book because I thought that it had great potential. While Amanda’s habits are not praise-worthy, I understand her plight at being posited in a very competitive and austere school environment where if you don’t get exceptional grades or don’t wear a particular type of footwear, you are classified as being “Unschool”. Furthermore, she gets looked down upon by other students as well which can be detrimental to one’s esteem.

The book started becoming more interesting towards the end after Julia befriends Baker, providing her with the respite that she so well needed. Another thing I found to be interesting is the fact that her three bestfriends are also named Amanda. The relationships that Baker makes or values don’t appear to me as being good enough. Her father doesn’t behave lovingly towards her; her stepmother while being more amiable, doesn’t take a stand for her; her friends behave rather odd at times. There was also the fact that quite a bit of the lingo was incomprehensible to me. Because I couldn’t grasp the cultural meanings behind certain phrases or words, I felt that I was missing out on a lot more. Overall, I didn’t like it much.