A play based on the natives of Yoruba, Death and the King’s Horseman marks the journey of Elesin Oba (the chief Horseman of the King) who is meant to sacrifice his life and follow the dead King into the afterlife. Filled with ritualistic nuances and a strong emphasis on the conflicts between colonizer and colonized, the play portrays Elesin’s conviction to perform the ritual and ultimate failure in sticking to his words. Simon Pilkings, a British Officer, not only intervenes in the sacrificial ritual but plays an integral role in sending Elesin’s eldest son Olunde abroad to study, thereby separating father and son. The ploy of the colonizers to tame the supposedly “uncivilized” natives pushes the plot forward to its ultimate disheartening end. 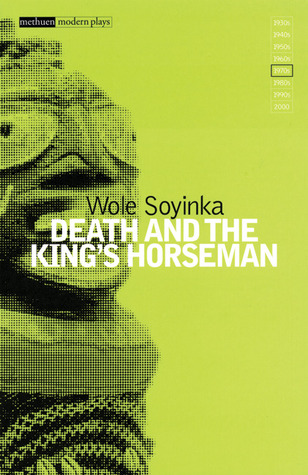 college.  While the authenticity of the culture of Yoruba natives is kept intact through their dismissal of the colonizers rules, their freedom to practice rituals as per their heritage is denied because of the might of the colonizer. Apart from the theme of culture and freedom, we also witness a spark in the Women of the society who know their place and are firm in their beliefs. They are depicted to be the strong face of Resistance that is gradually building up. I found the character of Simon Pilkings to be so infuriating and that of his wife Jane Pilkings to be rather insensitive and foolish. Even though she is more docile and approachable than Simon, she doesn’t stand up for herself when mistreated by him. Her views are unworthy in his eye as he often orders her to “shut up”.

The innate tendency of the colonizer to classify what they don’t comprehend as “insane”, “barbaric” is more than evident in the manner Simon speaks about the natives.  The plot is so rich in the way it intersperses the fight of indigenous people – against foreign forces that attempt to oppress them in their own lands – with that of the ignorance of the colonizer which finally leads to dire consequences. It was very enlightening and wholesome but I had to give it a 2 star rating because of Elesin’s monologues and dialogues with others which flew above my head. I didn’t understand most of what he was trying to say as he always spoke in riddles. I had to rely on a lot of other sources to get the gist of it. And I believe that if you can’t make sense of what’s going on in a book then you can’t get the complete essence of it. So while the story is really good, I found it difficult to process a lot of the content.