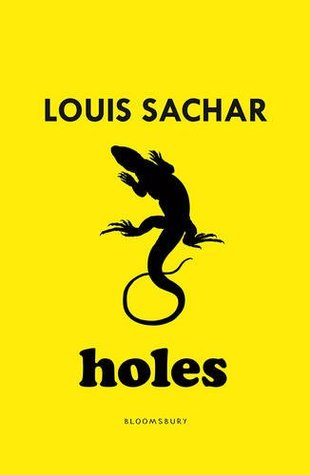 Camp Green Lake is a juvenile detention center situated in a deserted landscape in Texas. Stanley Yelnats, under a case of mistaken identity, is imprisoned at the camp and must dig holes everyday to complete his sentence.  The Warden at the camp is a threatening entity – to be feared and avoided at all costs. Her motives behind making the kids dig holes seem to be fishy. Stanley soon realizes that the Warden is not the only person he needs to please in order to survive at the camp. The kids (X-Ray, Armpit, Squid) already serving their terms, also demand great compromises. Somehow amidst all the frenemies, he finds a companion in Zero. Their connection is deep rooted, only Stanley doesn’t know that yet. Holes is a fantastic tale of adventure, camaraderie, ancestral connection and fate.

This is a middle grade book that is sort of timeless in its quality. Some stories go way beyond their age barriers and become more meaningful. From a bullied kid who felt inferior to a confident braveheart, Stanley’s encounters at the camp bring out the best in him. We are witness to the gradual change in his disposition. The military rule enforced at camp is infuriating. The kids live under harsh conditions and become tough through experience. Perhaps because of the estrangement of the camp from the outside world, the Warden was able to dominate everyone to her liking. There was no legal force stopping her. Digging holes as part of a punishment seemed awfully suspicious. So we begin suspecting the Warden of having ulterior motives. The characters of the children are etched out to be independent and bold, cut off from the innocence or playfulness of childhood.

Stanley teaches Zero how to read and write, which I found to be really sweet. He gets into trouble for it too, but it remains an anchor that tethers the two to surviving the difficulties they face. The book switches back and forth between the past and present. We learn of Stanley’s ancestor and other individuals who play an integral role in the current nature of events. In the end, it all makes perfect sense. The switching of perspectives is not overwhelming but not simple enough either, that you see the ending. At times I wished that Stanley wouldn’t be as submissive, but the climax makes up for it. I really liked this book and at no point was I getting bored or feeling disinterested. Recommend to those who enjoy camp stories or adventurous ones.