Candide overwhelmed by the words of his mentor Pangloss, gets 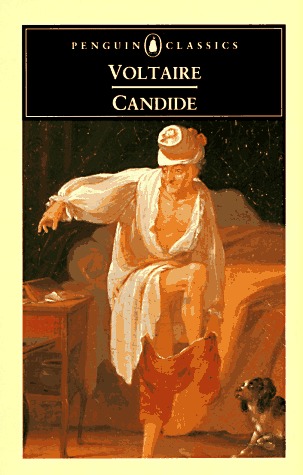 swept up in a chain of events which ultimately result in a constant shift of landscapes, as he moves from one place to another in search of his loved ones. Having absorbed the notion of cause and effect, he rationalizes all the happenings around him to the way of nature. Instead of succumbing to grief or fury, he pacifies himself with the thought that all that happens does so for a reason. In this elaborate journey, he meets new people and has various eye-opening experiences. He and his companions are at times driven away, face death threats or are received with the greatest regard and bidden farewell to with bags of jewels. Voltaire has put together this story of Candide whose love for Cunegonde takes him places he normally wouldn’t have known much of.

A quick read of a hundred pages or so, the book packs so many instances that are odd and not really predictable. Right from encountering a city where precious jewels are considered rubble to witnessing the hanging of a loved one. Candide’s mentor and philosopher Pangloss has educated him since long to believe that everything that happens is for the best. But when he tries to equate multiple social evils to being “for the best”, it was a little irksome. There is optimism and there is illogical thinking. Many sections of the book seemed to blur the line between the two. There are many characters in the book who have brief roles to play. Some surface from time to time, others are lost in the past. There was some unnecessary violence too in the book which makes you question the nature of the character who initiates it. The book also points to the structure of society as was in Europe during the 18th century. Even though women weren’t as high up in social ranking as men, Voltaire hands a different kind of authority to some of the female characters of the plot, who in their own way climb up the pedestal. Candide’s love for Cunegonde, though a kind of instant-love, is emphasized throughout the book. Wherever he goes, he is always calling out to his beloved to wait for him. But just when you’d think they could be together, his conviction falls flat. And again we wonder how true Candide’s sentiments were. For a classic read, this book is bizarre and yet enjoyable. Worth knowing what the deal is.