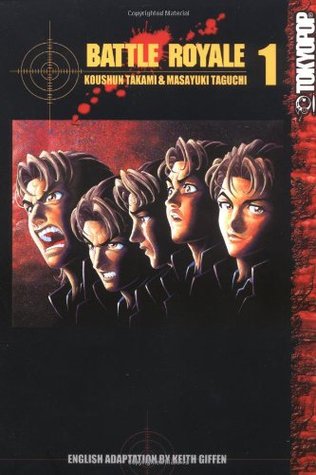 are tricked into participating in The Program which compels them to kill each other in order to survive on the island they have been sent to. They are each given a bag with the necessities like a weapon, a map, water, food etc. But just enough to keep them going for a while, after which they have to resort to other means. Spanning over fifteen volumes, the manga explores how negative circumstances bring out the worst in people. Yet many of them are alight with hope and faith in the humaneness of their fellow classmates.

Shuuya, Mimura, Kawada, Noriko and Sugimura are the main characters who influence others and try to rebel against the Program. Flash backs help us understand who these students were and what they are forced to become in order to live. A majority of the characters are killed off in the first ten volumes until only the main ones are left. Every few hours or so, certain sections of the island are made danger zones which ensures that inactivity is just not an option. In a scenario where even the minutest of movements by one has an impact on the life of another, these barely grown ups loose every sense of childhood and become endangered by the demon within. A journey that captures loss & suffering and how people cope with them, marks this series of brutality, love and camaraderie.

I loved Hunger Games when it came out. And what drew me to this manga is that. But unlike Hunger Games, there is way to much of character overload in this series. Many a times it was difficult to keep track of who died, who killed whom. And the switch between flash backs to present wasn’t an easy transition – maybe because this is my second manga series and I am not used to reading it. I really adored Shuuya, Mimura and Sugimura’s trio. They are good friends even in school and have always stood up for what’s right. Despite the extreme violent conditions on the island, we are privy to some lovey-dovey scenes between a few couples. It may seem insensitive or wrongly place but what better time to realize/express one’s love for another than when they are surely about to die.

I felt that the detailing or graphic content was too overwhelming at times – gory to be specific – complete with the split gut, blood pouring, beheaded scenes. I don’t mind some violence but almost all the volumes were filled with such bloody depictions. There is some sexual content in there too. Overall, this manga is not subtle in any way. Its a very open, straightforward portrayal of the fear and wrath that engulfs people when they are pushed beyond their limits. The story is reasonably good (in an infuriating way), dialogues are simple and well thought out. The sketches were the only major thing I had some problem with. The climax and the twist towards the end are good but not brilliant. I feel quite a lot of people could have been saved had they been given a thought. If ninth graders can wield a machine gun then they can think sensibly too. Overwhelming is not a good enough word for this manga. But if you are into Hunger Games + a lot of gore, then give it a try.