I received this book from Bloomsbury India in exchange for an honest review. Thank You!

In this last installment of the Tamanna trilogy, we are caught in the middle of what appears to be nothing short of the scariest ride in a carnival! Tamanna’s plans to return with Manoj go awry when an accident in the past catapults her into 2012. Recovery is the last of her worries since she doesn’t even know where to find another ticket to the past. Meanwhile, Manoj has landed himself way too much in the future in his attempt to meet Tamanna. As in 2022 as opposed to 2012. Tamanna’s trusting nature causes even greater mayhem – a wicked scientist-doctor tags along determined to ruin things for the both of them. She discovers what it is like to be caught unaware in a land so advance that moving places becomes a muddling task. 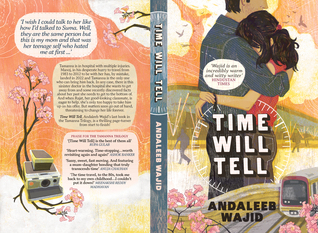 This book truly is by far the best of all three. It was breath taking at times, and at times simply frustrating. Time travel can be a complicated process to ingest if not explained properly. And the concepts too can be different with ever movie or book. But I must say that Andaleeb Wajid did a commendable job of answering any and every query you might have had from the first book till now. All loose ends tucked in nicely to form such an excellent picture of the ending that I almost wished it wasn’t over. As much as I still don’t like Tamanna, I wished I could read some more about their lives. The climax was out of the blue, even I felt the brunt of the scenario that took Tamanna by surprise. The character of the doctor seemed very harmless and totally not like what it turns out to be. Just goes to show that a lot of people are comfortable behind masks and won’t stop being inhumane as long as it benefits them. The progress made in this book is so unexpected that I was all set to give it a 3 star rating. But the last 40 or so pages made sure the rating was a notch above. My attention towards this trilogy had been caught by the third book and rightly so, it was pure genius! The author’s writing style was more toned down in the other two books whereas, she picked up speed and settled into a car chase kind  of rapport with the words in this one. I was literally squealing and biting my nails by the time it ended. Totally worth spending time over. A shout out to all thriller and mystery fanatics to grab a copy of these books and give them a much deserved chance.