Thank you Bloomsbury India for sending me a copy of this book for review!

The Time Machine meets A Cinderella Story in this quick light read by Andaleeb Wajid. No Time For Goodbyes is the 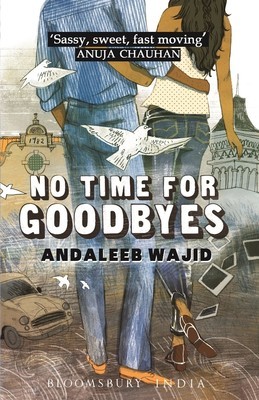 first book in the Tamanna trilogy wherein a boring winter morning turns into a much horrifying trip to the past. Tamanna only wanted something fruitful to occupy her time but she’d never have assumed that picking up a Polaroid of her mother would land her in the exact scenario in 1982. With absolutely no clue as to how she went back in time, Tamanna winds up in her grandmother’s (Ajji) house with a suitable lie backing up her sudden appearance. It’s no fun to realize that her mother – Suma and her two aunts are teenage girls (just like her) and not as welcoming as she’d hoped. Amidst the tension that likely ensues, she finds reprieve in the company of the simple minded Manoj, who is their neighbor’s son. But soon attractions grow, where in the future there ought to be none.

Manoj’s granddad is the one who invented the time travelling camera, courtesy of which Tamanna ends up in this muddle, unable to contact anyone for the lack of mobile phone service in the 80s. It is up to him to use whatever  technique possible in sending her back to the future – something that seems more and more difficult as the days pass. And as she spends more time with the girls, Manoj and her Ajji, the conflict is between whether she truly wants to go back or not.

It was the third book in the trilogy that drew my attention towards this series and so I gave the first one a try and sad to say, didn’t like it much. The plot is really simply and sweet – had a lot of potential but this was one of those books where the protagonist and I didn’t share the same wavelength. Many a times I felt I couldn’t connect to her thinking and consequential actions. Towards the end, her nature is even more questionable. The author’s writing style is very easy to get into and that was a plus point. For a time travel book, I found this one to be not as gripping as expected. And evidently I took over 4 days to finish this 200 paged book. Manoj is a straightforward, caring guy without whose support Tamanna wouldn’t have lasted a day in 1982.  His and Ajji’s character were portrayed very realistically. She’s a guiding figure in the book and reminded me a lot of my grandmother. The 1982 depiction of Bangalore brings about a peaceful image and I could relate to their trips around the city as I myself live in Bangalore. I found Tamanna’s mother  to be rather infuriating as a teenager – what with all the unnecessary bitterness. Some of the exchanges between Tamanna and Manoj lacked conviction and on the whole, this was an okay read. I am hoping that the second book will be better.