So I have been absent for a while and that’s not only in the blogosphere but my college attendance too is running low of what I need in order to write my finals (scary!). I am simply enjoying the weather and lazing around reading, watching tv shows. But now that this year is also going to wrap up soon, I must step into my philosophical shoes and type in a couple of poems, prose and reviews asap!

If you’ve been following this blog or even browsing on and off, you might remember a book review I’d done – And We Remained by Asad Ali Junaid. Click on the link if you haven’t and you’re curious! Here’s a chance for you to win one of the three copies that the author is generously willing to give out to 3 lucky winners. All you have to do is spread word of the giveaway on any ONE social networking site; make sure your post can be publicly viewed and comment with the link of your post. It could be on twitter, facebook, tumblr or any other site.

This giveaway is open within India only. The three winners will be chosen at random and it will be declared on 19th January 2015. 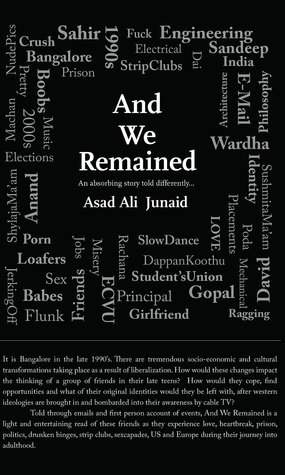 It is Bangalore in the late 1990’s. There are tremendous socio-economic and cultural transformations taking place as a result of liberalization. How would these changes impact a group of friends in their late teens? How would they cope, find opportunities and what of their original identities would they be left with, after western ideologies are brought in and bombarded into their awareness by cable TV and new media?
Told through emails and first person account of events, And We Remained is a light and entertaining read of these friends as they experience love, heartbreak, prison, politics, drunken binges, strip clubs, sexcapades, US and Europe during their journey into adulthood.

About the author (from Goodreads Bio):
Asad Ali Junaid is a design professional in Bangalore working in the area of Human-Machine Interaction.
Junaid’s book – And We Remained – started as a story which needed to be told… and one which needed to be told differently. While he was struggling to get the narration style and structure right, he joined a three week in residence ‘Just Write’ fiction writing workshop where he got a chance to learn the nuances of and hone his story telling skills from authors Anil Menon, Anjum Hasan and Rimi Chatterjee.
Junaid writes whenever there is a compelling story inside him bursting to get out. Junaid has written several short stories and is currently editing his second book – which like his first one – has an absorbing story and is very different in narration style.
Junaid has been a resident of Bangalore most of his life except for brief stints in the US for higher education and work. He has seen Bangalore’s transformation from the sleepy town that it was, to an IT hub of today.
Junaid’s wife is a Post-Doctoral Researcher at Indian Institute of Science in Bangalore. Their toddler completes their home while keeping them on their toes.

Now that you are sufficiently inquisitive about what could be in this book, perhaps participate and test your luck? Such growing writers, need nothing but an audience, someone willing to listen (or read in this case) to their story. I urge you to give this book a try!