I spent the last thirty days caught up in the extremely tiresome process of shifting houses. Believe me, when you have 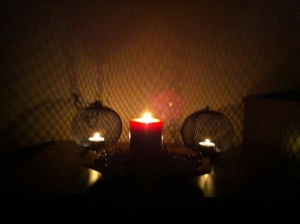 over 30 cartons filled with things, the process drags on and on. Albeit it was fun, to be in charge of something as magnanimous as a house. I’ve only ever had smaller responsibilities like taking care of my brother or setting the table for dinner. These times were filled with little achievements and little failures. I passed my third semester finals which wasn’t a surprise since all the exams were decent. But I’d been apprehensive about how the correction would be. I did score really well in both my Media subjects and that is all I care about at the end of the day. Don’t even get me started on the pointless tirade concerning my triple major curriculum.

Winning the Guess The Booker Prize Winner contest held by India Book Store was a highlight. Not only can I use the gift coupon for new bookshelf additions but the nominated books I chanced upon had some really nice plots and so there goes by TBR pile burrowing a deep hole towards the core of the earth. I am currently reading The Trespass by Barbara Ewing and its lovely. Every page gives you a good fill and its one of those books that will last you a long time. Its a perfect book for me – set in Victorian England. 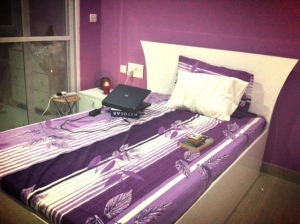 My room walls are purple, so is my lamp, candle and bedspread. Did I print a bizarre, maybe even hideous, picture for you? But actually its not. The white furniture tones down all the purple-ness. I took up Event Management as an elective and so far we’ve only had two classes but I’m loving it! Had a few ups and downs with some people. But I’m no longer letting it bother me. See my Whatsapp status (in Korean) – 바람처럼 그냥 가라 – meaning “Just go like the wind”, which I cooked up on my own without using translate or google! So proud of myself – Korean language learning is finally leading somewhere…

One of my minor follies is that I couldn’t keep my book ban in check. And with the new house I almost had to get a new bookshelf. Which although a happy fact is a little disappointing especially since I already have many tens of books I havent read – some still wrapped is plastic. Self Control!

Also for some or the other reason, plans to meet up with friends keep getting delayed. Something or the other pops up and it all back tracks. Its been so long since I went out with the different friend groups that I have. Plus I feel like a sense off detachment has intervened between previously good friends. Like they no longer care enough to make an effort. Hopefully everything will sort out as the year ends. I’m turning 20 in less than five months and so its time for a bucket list. As much as I cringe to admit, letting go of this inherent childishness and stepping into the suit of a mature adult is a little bothersome. To the extent that I was deliriously happy on finding my Pokemon cards and I yearn to rewatch many animes.

That’s that and I miss writing so dearly. I even wish I could participate in this year’s NaNoWriMo because I have a solid novel plan. But there’s just not enough time. Nevertheless, I am going to write the novel later and not give up on it. If not NaNo, for the sake of writing I will complete it.

Hope y’all had a freaky Halloween and are preparing for a jolly Christmas.