Disclaimer – All images are from Google and I take no credit for/own either of them. 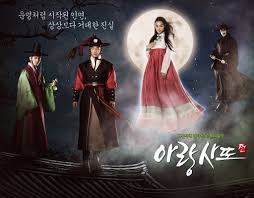 Arang and the Magistrate is a drama intertwining two people’s fate and the role they play in the bigger picture of life and death. Arang, a ghost who doesn’t remember how she died wanders the afterworld trying to survive with mere food offerings and stay away from the Grim Reapers. She comes face to face with Kim Eun Oh who is the Magistrate of the town Miryang during one of her escapades and he, who can see ghosts, on a whim decides to help her flee the reapers. Thus begins their acquaintance which as time passes grows into a friendly relation.
Kim Eun Oh is on a quest to find his mother who disappeared from Miryang 3 years back and he finds a shocking connection between his mother and Arang which leads him to believe that she is the key to understanding what may have happened to his mother. The drama also features the Gods of Heaven and Hell who are constantly watching over the human beings and guiding them. They ultimately play a bigger role in banishing evil from the face of the Earth and help the characters achieve their destiny.
Arang on the other hand doesn’t want to fade away without knowing the cause of her death and so through 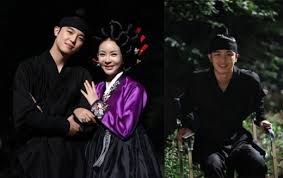 her cunning scheme is brought to meet the Gods who grant her 3 months of life to try and find the culprit. Back in Miryang, everyone fears Lord Choi who has more power and control than many authoritative persons. With his arrogance and contempt of the lower classes, he seems to be the likely suspect responsible for all crimes committed in Miryang.

With the help of the Shaman, Arang’s ghost accomplices and Kim Eun Oh’s friends, they strive to work out the problems in each other’s lives while trying not to fall for the other.

My two main motivations for watching this drama were Shin Min Ah, who plays Arang, and the excessive roles of ghosts in it. I had certain expectations and this drama surpassed them all. It was so warm and adorable to watch from the very beginning. There was not a point where I wanted to drop it. I’d binge watch episodes for hours at a time. Arang is a fierce character not subdued by even the most terrifying of the Grim Reapers. She struggles for what she believes is truly hers and is awestruck to know that the Magistrate Kim can see ghosts, therefore help her. The plot is very intricate and not really predictable. There is ofcourse a love triangle in the story and I really felt bad for the person with the unrequited love. I thought that Lee Joon Gi played the role of Kim Eun Oh exceptionally and deserves applause for it.One tiny thing that bothered me was how hard Eun Oh was towards his friend/slave Dol Sae. Dol Sae is a really protective and affectionate character who only means well for his master-friend Eun Oh and ends up interfering in his matters. And even though we come to know that Eun Oh too cares about him, they have conflicts so often and I felt that he was unnecessarily harsh with Dol Sae.

The climax was brilliant and in fact there were more than one focal points towards the end that determined how the ending would turn out. Action sequences – two thumbs up! Though not realistic (which action sequence is?) it was fun to watch. Kim Eun Oh and Moo Yeong (the main Grim Reaper) make a kickass double. I wish there was more shown about Moo Yeong’s history. The little glimpses that I saw made me want to know more about him and how he ended up as a Grim Reaper. There were quite a few sentimental scenes too, that if you are soft hearted, would end up in tears. I absolutely loved the drama and its one of the best I’ve seen in awhile. A must watch for kdrama fanatics!