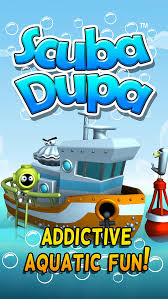 Been playing Flappy Birds for far too long? Want a new addictive challenging game? Scuba Dupa is new and has made it onto my list of “Most Frustrating Games”.

Controls – Functions with both tilt and tap. No other keys required to play the game. Which I think is quite amazing! Particularly for a touch phone, I don’t like games that have a lot of keys to maneuver the character.

How To – Basically the game consists of this teeny tiny, presumably, human character in a scuba diving suit. We the gamers have to direct the scuba diver through a maze like structure, collect pearls and avoid being hit by the rocks, water plants, sunken ships, boards and such obstacles. We do that either by tilting our way to success or tapping precariously, just the right bit, to not cause a collision.

I don’t see this becoming a frenzy like Flabby Birds did. Maybe it should,

maybe not! Its really cute but very frustrating. Every try makes me want to throw my phone across the room but somehow I gather the strength to try again. Its one of those games where you have to get habituated to using the right timing and movement in order to establish a flow of good points. Another aspect that is sort of different is that every time the diver conks his head on something, he goes “Oww!” in a very funny way and its soul floats away. The whole game has a very user friendly vibe. The graphics too are good. I have had this game for about a week and so far, no glitches. Which is great in my perspective, because a lot of other games I’ve downloaded get really slow in response and heat up the phone really fast. This one keeps you occupied and yet has simple functions. Give it a try! There’s always some spare time to pass and Scuba Dupa is actually fun.