I received a copy of this book from Harlequin India for review. A big thanks to them! 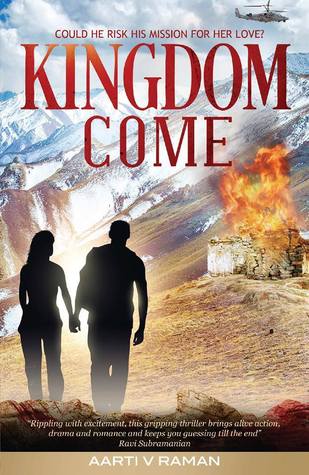 steadfast world of terrorism. Krivi Iyer is part of a bomb diffusing squad and has lost enough in life to not care when he is on a mission. Years of dealing with crime and death have taken a toll on him. No longer the soft, smiling self, he sees no sense when a certain female individual gives him more attention than need be and somehow he finds himself wanting to reciprocate it. Ziya Maarten is more than intrigued by Krivi’s tough guy exterior. Surely he knows how to laugh? Captivated by his allure, she finds herself risking everything to be with him, even if it means being pushed away by him. A tragic event leads Ziya to accompany Krivi on the trail of an inhuman, maniacal terrorist known as The Woodpecker. His works spread like wildfire, pun intended, and this time around, a personal vendetta has him focused on Krivi Iyer and everyone around him, which includes Ziya. Meanwhile, a terrible folly on the part of Krivi drives a wedge between the two lovers. Will they catch The Woodpecker before he blows up any chance of a future for them?

Admittedly this book took a lot longer to finish but that’s only because of college priorities. So take no notice of that and assume it’s an uninteresting book. No, it was totally and absolutely worth spending time over. Ziya Maarten is a do-gooder with deep rooted love for her dear ones. Throughout the novel, as would anyone, she is inclined to take some silly decisions but at a point the stronger side of her surfaces upon being tormented. I really liked the collab of terrorism, detective and romance angles in this book. Krivi is the typical brooding guy with smouldering looks who thinks he doesn’t need love in life but is proven wrong by the female protagonist. He too must make some sacrifices for the greater good of the world. I haven’t read much on terrorism so this was a good change. I thought this might be like your average detective novel with a love angle to it. But its so much more and the revelation  towards the end is mind blowing. Something you’d never have thought. Not to mention the beautiful vivid imageries describing Ladakh and Tibet helped the novel play out in my mind. The one thing that sort of nagged at me is how fixated he got with her “silver eyes”. I mean, once he realizes he cares for her, its like every second page has a mention of her silver eyes. Nevertheless, I really enjoyed it and you should definitely give it a try.