I haven’t been active for a while. College has started and I’m barely keeping up with my reading. Anyhow, I am having loads of fun and today, I have a review for you guys…

A big thanks to the author for sending me a copy of the book in exchange for a review. 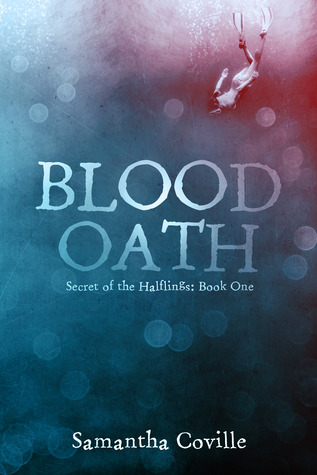 Blood Oath by Samantha Coville is a fantasy, YA novel that explores a new breed of paranormal creatures known as Sirens. They are vampiric in nature with an affinity to water. Raya Sarian’s world is uprooted when all of a sudden her father, whom she hasn’t seen in forever, comes to take her away. Having lived most of her life with her ever-so busy mother, Raya is terrified at the thought of going to live with her father in a world where nothing is as  it seems. An incident from her childhood haunts her every time she thinks of him. The monstrosity she saw in his demeanour was more than enough to make her doubt her father as well as her capabilities as a Halfling.

Settling in a camouflage basement, Raya is exposed to an entire settlement of Sirens. Their ways of living and such horrify Raya and yet she is curious to know more. But Raya’s welcome is not as warm as she’d have liked. Making friends is not easy when her existence defies their laws and a whole bunch of angry vampires want to get rid of her. Somehow through it all, she finds herself a group of loyal friends. And yet the feeling of being in the dark about something major nags her. What is it about herself and these people that appears to be more dangerous than their eating habits?

This one was an inquisitive read. I liked the concept of water vampires. Its gets you into the story from the beginning. I felt that even though Raya and her mother knew about the existence of Sirens, their knowledge was very vague. Like a trouble-at-the-back-of-your-mind kind of thing. As simplistic as the cover is, I totally loved it! That figure swimming into the depths of water highlights how water is vital to these creatures. Raya’s father being of great power doesn’t change anything. She gets bullied a lot and I found it to be really sad that she had no way of getting back at them without the help of her Siren friends. There comes a point in the novel when Raya does something extremely stupid. It makes you question her integrity and thought process. But then again, it wouldn’t be much of story if everything was perfect. It has quite a lot of content for a 200 paged book. That was something I really liked. There’s bits of romance, betrayal, scheming, action and so on. Something about Raya and Drew’s relationship didn’t work for me. I think it was a little superficial. Nevertheless I am looking forward to the next book to add on to this one.