When I came across this book on Goodreads, I couldn’t believe that I would be able to review it. The synopsis sounded wonderful and soon enough, I received an ecopy of this book from the author. Thank you so much for sending it to me. 🙂 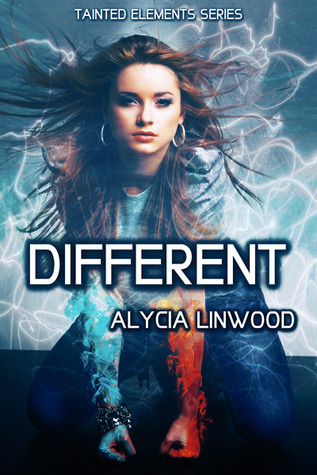 Different by Alycia Linwood is a fantasy novel about Moira, a teenage elemental who has an affinity for air. As a newbie elemental, she is only learning the tricks and trades of manipulating air to her liking. In a place where pure, healthy elementals possess the ability to master one strong element (either air, water, fire or earth) and some elementals have only a sub-element, Moira is shocked by the sudden emergence of another element in her power. Surely, its not possible to have more than one element? For such an occurrence is unheard of. Bewildered by this new found ability, her scientist mother and magic disease carrier father plan a vacation on an island, in the hopes that they would seek answers for this bizarre happening.

On the island, Moira comes to know that there are others like her, who possess the skill and power to control more than one element. Relieved and yet curious, she begins to train with these elementals. It’s there that she uncovers a whole world of truth, to which she and her parents were oblivious. Truth that alters everything she knew about herself and the world she lived in. Truth that can very much lead to the kind of danger her parents wanted to protect her from. Governmental organizations; the dangers of mastering more than one element; a secretive team leader (Jaiden) who is never fully open with Moira are just some of the things she has to deal with. And hopefully in time to protect her kidnapped parents.

This story had immense potential from the very beginning. I feel some of it got lost in the protagonist’s tendency to overthink and her occasional naivety. This book with its superb storyline could have been read in a day but I took three days to get it done (Moira is stubborn and well her deductions, a little annoying). I loved the whole concept of elementals and magic disease. Most of it is unheard of. Atleast I haven’t read any book that talks about genetic manipulation of elemental genes or islands where magic disease carriers go to stay. So thumbs for that. Another thing that got to me was that I was confused with  the first 2-3 chapters because there were some loose ends that didn’t connect so I couldn’t process what was going on. But later on, it picked up and became more interesting. So I suggest you get past the first few chapters and don’t give up. The ending was brilliant! Never did I ever have even a tiny inclination to what would happen at the end. Another thing I really liked about this book was that, for a change, there wasn’t much (or any) romance in it. No love triangles, no jealous exes trying to get in Moira’s way. It’s a nice read if you can ignore Moira’s constant babble. I’m most definitely looking forward to the next book.