I have never watched or read or played anything with a zombie theme in it. Amidst all the hype about Left for Dead and Resident Evil and such, I have just unintentionally always walked past the zombie shelves. So this is not only my first anime but also a first in the zombie arena.

Highschool of the Dead is an anime that focuses all of its 12 episodes on the Zombie Apocalypse. The first episode has zombies in it and so does the last. The anime starts off with Fujimi High School being attacked by one zombie. And like dominoes one after the other, the whole school gets zombie-fied, the teachers, students, staff – all of them except a bunch of girls and guys who are the main cast. Now Takashi has always had a soft spot for Rei, after all they have been childhood friends, but Rei starts dating his bestfriend Hisashi. The love triangle. For better or for worse, despite all their efforts, Hisashi gets bitten by a zombie. Is there anything that Rei and Takashi can do to save him? And if there is, will Takashi rescue him?
The next two characters are Takagi and Hirano. Takagi is the kind of sassy girl who listens to no one and bosses around. There is a part of her that’s kind and nice but she hides it behind all witty repartee and puts up a brave front. Hirano is the guy who follows her around like a lovesick puppy. He is timid and meek, gets bullied all the time. But once there is a rifle or an AK47 in sight, you get to see the transformation in his nature. No longer the helpless one, he often leads a fight only to obtain great results.
Shizuka is a nurse at the high school. She is shown to be a bimbo-like character and often finds herself in trouble. She is the odd one in the group as she doesn’t fight her way through a swarm of zombies but rather depends on the others to protect her. She is also the one who drives the group around town in the different vehicles they come across. Saeko is an older student at the school who carries a wooden sword with her and is the president of the kendo club. She is brave and strong and usually takes down an army (of zombies) without much trouble. She is also the flirtatious and bold character that sidles up to Takashi.
At a point of time, these 6 come together in the school and plot to escape. On the way they attempt to free as many people as possible. Once out of the school they realize their luck just nose-dived into a well. All over the globe, the zombie infestations have resulted in great chaos. The trouble they were in was ant-sized compared to what they have to face now. Will they make it in time to save their families and somehow try to rid the town of zombies?

The plot is okay. Apart from the routine killing of zombies episode after 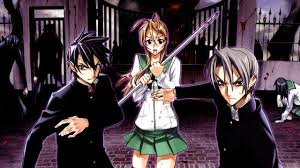 episode there’s not much base to it. Something really really stupid about this series is the amount of focus on “girl parts”. I mean there were times when a zombie was getting chopped in half and the entire screen covered somebody’s boobs. Uh hello? -.-
A lot of action (obviously) and very informative about the different kinds of arms and ammunitions. If you pay close attention to what they are saying, at the end of the season you’d know a great deal of names of guns and swords and stuff. One thing I’ve realized after watching this anime is that, once you start watching its impossible not to fall for anime heroes 😛 They are so damn cuute 😀 And even some of the bad guys.. man Do they have to look that good?!! There are rumours of a 2nd season. I don’t think I will watch it. Anyway, I am not entirely sure how much I liked (or did not) this anime. Watch it if you want to. But if you don’t, your not missing out on much.