Hey you!
I’m back with another drama review. This one is also  a Lee MinHo starrer with Son YeJin 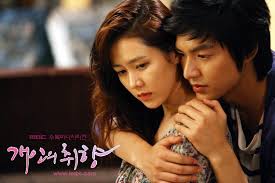 as his co-actor and the leading lady. It has a rather unique plot and I was immediately hooked onto it. Its known as Personal Taste or Personal Preference. This show revolves around the 2 characters, JinHo and GaeIn. JinHo is an architect and GaeIn is a furniture designer. They both stumble into each other, one fine morning. But as fate would have it, they get off on the wrong foot. Later when JinHo realizes that GaeIn is the key to his  success, he decides to reconcile. He pretends to be gay in order to rent a room at GaeIn’s house.
On the other hand, our protagonist here, is dealing with a bad breakup. In her depressed and pitiful state, albeit a little hesitantly, she agrees to lease the room to JinHo. Oblivious to JinHo’s ulterior motive, GaeIn begins to get comfortable with him.  When JinHo (somewhat drawn to her) decides to help get revenge on Chang Ryul (her ex) she agrees. Amidst all the scheming and the etiquette lessons (that GaeIn obviously needs to transform into a swan),  the obvious happens. They begin to have feelings for each other. What will happen when they finally acknowledge their feelings? How long will JinHo be able to keep up the gay pretence?

I grew really fond of this drama since the first episode. It was hilarious from the beginning. There is no beating around the bush or dragging out scenes. The first few times they meet, their constant bickering was really amusing to watch. GaeIn is a clumsy, tomboyish, sensitive and innocent person. She forms strong bonds and gets attached to people  easily. And so when JinHo is even a little late coming back from work, she gets all tensed and worked up. Pacing in the house, sitting out on the steps. And a typical JinHo would snub her for being so “weak hearted and clingy”. But we all know, secretly he was quite pleased that a girl would do all this for him. He can’t hide that from us viewers and die-hard fans 😉

On to the other characters, we have Han Chang Ryul played by Kim Ji Seok. He appears to have a very charming personality apart from the fact that he dumps GaeIn for her bestfriend. Yet I somehow sympathise with him (idk why..). Maybe it has something to do with the super sweet smile of his. In the drama, he seems to be the kind of well brought up, mannered gentleman. So let’s set aside his mistakes for awhile 😀
Then we have Kim In Hee (Wang Ji Hye), a very very very bad person! I strongly detest that character. Cause more than a hundred times, I’ve wanted to yank her hair  for being so evil-queen like. The way she manipulates her words to get what she wants is just UN-BELIEVABLE! :O She’s the character that obviously causes all the trouble throughout the season. Butting into matters that don’t involve her and just simply being mean down to the core.

Anyhow it is a drama DEFINITELY worth watching atleast once! You MUST! 😀 I believe I’m a little late for saying that. Probably the whole world has seen it and I’m the last person? 😛 Anyone out there? Not seen it yet? 😀